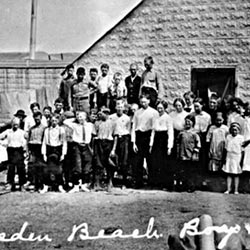 Lumsden Beach Camp did not happen by chance. It was created by faith filled people who had a vision. This bold vision became reality in 1905. This camp is a special place where adults and children come together and build a community.

In the early days, most people came to camp by either riding the Qu'Appelle Steamer or taking the train to Lumsden. Wilkies Livery supplied horse drawn transportation from Lumsden to the camp for 50 cents each in parties of two or more. Those driving could get good pasture for horses not far from the grounds. 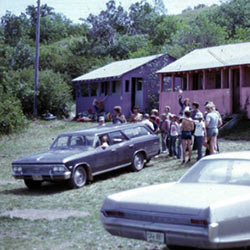 People were asked to supply their own tents in the early years. A limited number of tents were available for those who need them. Campers were also asked to bring ground sheets and straw ticks. Straw and hay was supplied to fill them. It was suggested that campers bring plenty of blankets, quilts and cushions, as nights were cool. The Ladies Aid of Lumsden spared no effort in providing good wholesome and well served meals. Breakfast and supper cost 25 cents and dinner 35 cents.

No Bathing on Sunday

On Sundays - before Sunday school until after the evening service - swimming was not allowed. This enabled groups to carry on study sessions or to have quiet time without distraction. Campers would often beg to go in the lake to cool off during those hot summer days, but the answer was a definite NO. Once in a while on those hot, hot Sundays, some brave souls would hike down the lake to a beach out of sight and go for a swim (the beach they went to is the one in front of our present site). This site became known as Sunday Beach or Bible Beach.

In 1911, the first camp building was erected. The Dining Hall was built where the Lumsden Beach Village Store now stands. The dining hall was enlarged and living quarters built on. There were sometimes 150 girls or boys in camp. No one was turned away. In 1912, the Tin Temple was erected. It was a good place to hold meetings on cold and wet days. It would seat about 250. Church Services were also held here. In 1917, the Leaders Lodge (named by Reverend Charlie Morgan) was built. This building provided accommodation for the camp leaders and included 24 beds. Early in the spring of 1925, cabins were built when the bell tents and walled tents were retired. Reverend Charlie Morgan named the cabins (dorms) 'Queens Quarters" and 'T-U-X-I-S Terrace". The Ice House was built in 1929. This building was built on Hindson Street with the consent of the Village Council, and was not taxed. 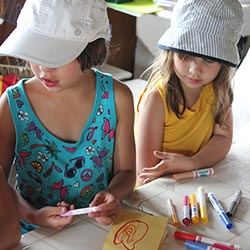 Lumsden Beach Camp continues to offer its unique ministry through summer programs for children, youth, and adults from all backgrounds. We are excited and proud to be a part of such a long tradition of providing a special place where adults and children come together to learn about God and each other. Although much has changed over the years, our camping traditions and values have remained strong. Today, people from diverse backgrounds participate in the camp as campers, leaders, staff, as well as board and committee members. Everyone can share in the magic of Lumsden Beach Camp. The camp is always growing, changing and trying to improve. With the camp's mission statement and purpose in mind, specialty camps to have been designed to meet the interests and needs of our campers.

Lumsden Beach Camp continues to challenge, renew and nurture growth opportunities for all. Lumsden Beach Camp has a special way of developing self-awareness, acceptance of others and confidence in all who participate. Campers, staff, volunteers return year after year awaiting the next adventure.